Some years ago, I noticed a youngster playing in Brasil for a futbol team called “Santos” (the former club of Pele, the legendary Black Pearl).  The youngster’s name is Neymar da Silva Santos, but he is known just as “Neymar”. 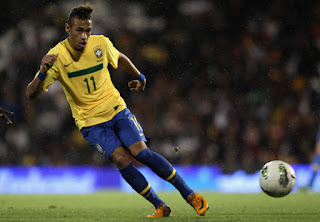 
This happened to me before when another young South American wunderkind player by the name of Lionel Messi caught my eye long, before he became famous for his extraordinary talent and inborn gift of what can be done with a ball. Likewise Neymar is one of those rare, young virtuosos to be seen on the green fields of futbol.  It was not long before Pele suggested Neymar for the Brasilian national team. 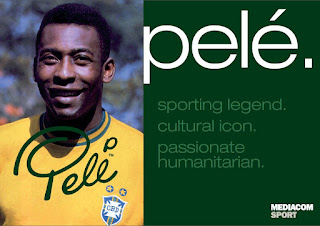 
So I was spot on, having recognized Neymar's extraordinary, instinctive style and talent. Once he was included in the national team of Brasil, the world began to take notice and start to make comparisons with other great players. Pele, the icon and great Brasilian player (who as mentioned earlier also played for Santos), said that Neymar is better than Messi.  This prompted another futbol legend, the Argentine Maradona, to quip “That’s stupid. Maybe Neymar is the best player in the world, but only if you say that Messi is from a different planet."  It’s difficult to compare the two.  Both great stars. 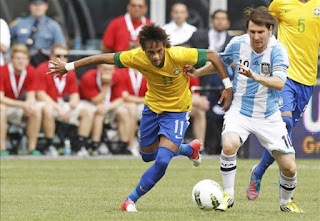 Two young stars:  Neymar and Messi, at an encounter between Brasil and Argentina
Messi, from Argentina, is the elder at the ripe age of 25, and recipient of three Golden balls and boots, as best player of the world.  While Neymar is only 21.  For the past year or so, the big clubs in Europe have been trying to get Neymar.   So far he has refused because he loves Santos, and the fans.  And any club wishing to have Neymar would have to dig deep into its gold coffers. (Interestingly, his last name is Santos, same as his club.) But there are many rumours about an imminent transfer to Europe. (One of the clubs courting Neymar is Barcelona, the club of Messi.) Will he leave Santos this season or next?  Yesterday Neymar’s father who has played a major role in his career said it will be 2014 before that happens. I am curious where he will play next, and would be pleased if he chooses a European club, because then we’ll see more of Neymar. To have both Messi and Neymar on the same team would be the pinnacle of a magical duo.  Stay tuned. Enjoy.
Henri van Bentum


Postscript:  just after we posted this item, it was made official:  Neymar is going to Barcelona.