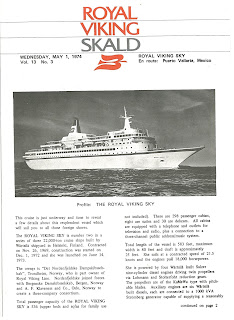 "Skald" Daily On Board Program


Upon arrival we learned Royal Viking Line had filled an order of art supplies we needed, enough for 24 passengers:  HB pencils, rulers, erasers, compasses, oil pastels, plastic palettes, watercolour pads, sketch books, Winsor Newton watercolours, acrylics, mini-canvas boards, watercolour brushes, acrylic brushes, pencil sharpeners, Red/Yellow/Blue pencils (the primaries). First, we were introduced to the passengers by the Cruise Director. Art class, Step One:  we put out sign-up sheets for the classes, maximum 24 people, the rest waitlisted. We feel 24 is the maximum number in order to give each ‘student’ some personal attention. Step Two:  finding a good location.  We found the ideal spot: midships, Sky Deck (highest deck). But there was no water source.  Problem solved:  Natasha would be the water carrier.  One deck below was the Trondheim Bar where she could fill two pails, then bring these up via the elevator. 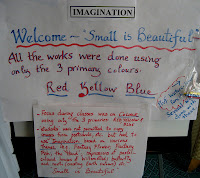 Natasha wrote up my instructions for class on the easel each morning
This she did for the entire voyage, and was nicknamed “Gunga Din”, or Water Buffalo. There was another obstacle:  the best tables were the card tables, also used by the bridge players. There was a concern we’d soil the table tops, and there was a conflict with the time of our class and the bridge classes.  I suggested the times be changed, while we’d cover the card table tops with plastic.  Accepted, all problems solved. We asked who were beginners, and more experienced ones.
IMAGINATION
My emphasis is always on using imagination and making sure the passengers didn’t just copy something from a neighbour, or a ‘pretty picture’ from a postcard. Ages – from 50 to 80.  Later a 7 year old boy from Thailand joined us. His name was Vilit.

Natasha and I with the family from Thailand, and my youngest student, Vilit, seated on my lap, 1974

Step 1 for the students was to do a scale of double eleven ladders with pencil.  One column, from very light to full pressure.  Another column, the reverse: begin full pressure to very, very light.  When this exercise is done correctly the middle of each column should be the same value. We had fifteen on the waitlist.  Soon one dropped out.  She came dressed as if going to a cocktail party. Even though the classes began at 10 am, she carried a Bloody Mary.  I kindly asked her to give someone else a chance from the waitlist.  I took a big chance because she was a paying passenger and could have gone to the Cruise Director or Captain even. Luckily she took it in good spirit and never showed up again.  Later during the cruise she often asked us to join her at the bar.  She was a bar fly. Once the pencil scale exercise was done correctly, we introduced the primary colours. 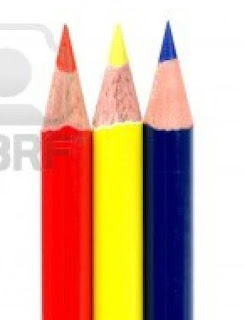 You cannot talk about colour.  Hands-on and eyes are needed. There was a choice of which colour to begin with:  Red, Yellow or Blue. (Again, the 3 primary colours).  Now the same exercise of scales as done with the HB pencil, but in colour. This took 3-4 classes.  Those who were more experienced were a bit impatient, but most did the exercises (except two).
Next blog post:  Part Two
Posted by van Bentum