Year of the Water Dragon

Soon we’re entering another “New Year”, this time it will be Year of the Water Dragon, celebrated in the Orient and by immigrants settled on these shores.


Twelve years ago, we were on a millennium world voyage aboard “Ocean Explorer I” where I conducted a floating art class and was resident guest artist.  One of the many ports of call was Bali, Indonesia.  There, we acquired this masterful woodcarving of a dragon, since 2000  was also Year of the Dragon.  It is very small, only 14 cm high and 7 cm wide. For 12 years we’ve had it on display at our various abodes. Back in 2000 when we purchased the carving, I said  that should I still be alive in the year 2012, we’d mark the occasion by honouring the humble woodcarver who created this striking piece. 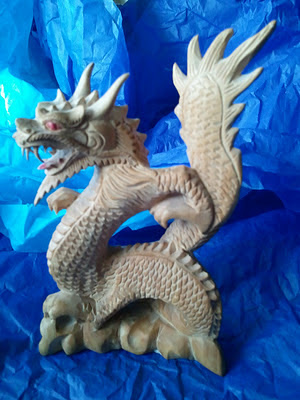 Look at the intricate carving, the detail, the teeth - -  all carved from  one piece of wood.  Bravo! Over the past 12 years technology jumped by leaps and bounds. Little did we know twelve years later that Natasha could take a picture with her mobile phone and post it on a blog.   Amazing technology.   (The photo concept was mine.)   Twelve years onward to the next Dragon year (2024) would make me 95 years of age, so it’s realistic to say I’ll not be here any longer on spaceship Ocean Earth.   Wishing you all a healthy New Year.