More about Paul the amazing Octopus and the World Cup

Canadians aren't really known to be big "soccer" aficionados, but that is changing. Where I grew up, in Flanders and Holland, we call the game Voetbal = Football and that's correct, the game is played 98% by passing the ball with the feet.  In North America the popular game of Football is a misnomer, since 98% of that game is played by hand!
How about Paul the Octopus, what a magician.  He has now a 7/7 perfect record for predicting the outcome of the German matches in the World Cup of FOOTBALL in South Africa. 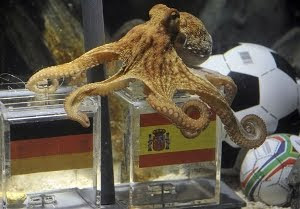 The match between Germany and Spain yesterday was his seventh correct prediction.  Just google Paul the Octopus and you'll find out all about him if you don't already know. He resides in an aquarium in Oberhausen, Germany (but is originally from England).
Anyhow, after yesterday's match, in Germany there are calls to turn Paul into "Calamari"! And apparently some people sang "Anti-Octopus" songs (whatever that is.) Meanwhile over in Spain they're praising Paul with acolades and songs, "Ole, Ole, Paulo el Pulpo Magico!".
Now we await the Final on Sunday of this popular game, worldwide viewership expected to be around 2 Billion.  How about that for popularity amongst the human family?
As for that final - Holland vs. Spain - neither team has ever won the biggest prize of them all.
Prediction?  I leave that up to Paul "El Pulpo Miraculoso".  Yes, for the first time ever he's doing to make a prediction about a non-German match.  Paul, who brings tears now to some in Germany, and joy to others around the world.
Hasta Luego!  "Hup Holland Hup!"
Henri
Posted by van Bentum