These blogposts about my time as a steward with Holland America Line (HAL) have ‘morphed’ or taken on a life of their own. We share these experiences because they’re part of history and of the time when, slowly but surely, Europe began to recover after WWII. Maybe I was just in the right place at the right time, to not only witness this “Phoenix” phenomenon, but be part of it.

In Part 2, I spoke of being a waiter in Amsterdam at the 5-star Hotel Pays Bas and wrote of Han van Meegeren, the notorious art forger. His forgeries were discovered through X-rays. Once it was confirmed the “Vermeer” and other “masterpieces” were in fact fakes, it wasn’t long before the finger was pointed at Han van Meegeren. He was charged, arrested and put on trial.
van Meegeren was given a 1-year sentence in prison, but in the process of appealing this decision he died of a heart attack, age 58, the same year I met him 1947.

Going back to the late 1940’s and Holland America Line’s “Nieuw Amsterdam”, in that era the passengers were an eclectic mix: ‘old money’, ‘new money’ (often profiteers from WWII); plus card sharks who fleeced the unaware passengers; underworld figures, bankers, US army officers either going home or returning to base in Europe. Some passengers travelled with their valets, and of course, movie stars.
Far below the passenger decks in crew quarters, four of us shared a small cabin, two bunk-beds. Wake up call was 04h30, and at port, even earlier, since all hands were needed for the luggage. I mention this to give you a picture of that era, especially the way it was in the First-Class dining room, where I worked as waiter or what we call on board ship a “dining room steward”.
The sign of a good waiter (or steward as they’re called, at sea) is someone who “is there but not there”. Standing discreetly back from the table, yet aware of any needs and acting swiftly accordingly, being pre-informed about the day’s menu - - these are all characteristics of a good waiter. 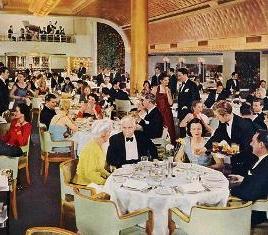 Our First-Class dining room featured French service. This means everything that possibly could be done is done at the table by the steward, such as making Caesar Salad, filleting fish (Sole Meuniere), carving the meat (Chateaubriand), preparing Steak Tartar, etc.
For fruit salads, we peeled the grapes with a tiny knife and ‘oyster’ fork before placing these in the salad. And, we always wore white gloves. Some of the other dishes we’d prepare included Peche Flambee, served in a small copper pot, and Crepes Suzette. At each table there`d be a “rechauffe” or re-warmer set, to keep any portions left over warm.


All the beer, wine, liqueurs and cognacs were supervised and handled by the Sommelier, who was easily recognizable with his burgundy jacket and a silver taste cup hanging on a chain around his neck. All the glasses were fine crystal. Everything served hot was always covered with a lid; vegetables and potatoes were served in silver bowls, sauces in silver sauce bowls. Mustard and ketchup (for the Americans!) were kept in small glass jars in a silver container with a lid. The choices available on any menu, whether breakfast, luncheon or supper were plentiful, as expected. Pampering is not sufficient a word to use here! There were no windows or portholes in the dining room. The ship was designed for Transatlantic crossings, which can be spooky at times.
To make up for the lack of daylight, the interior design had a light, airy and colourful Art Deco style. We’d have special Captain or Farewell nights, where the ladies, mostly aristocrats or movie stars, wore their diadems laden with precious gems. (Nowadays passengers are given paper hats.)

We could quickly spot the shady passengers, or the ‘boors’ who’d extinguish their cigars into a cognac glass. And trying to ‘educate’ those passengers was a waste of time and effort.
Often the Americans would push all the cutlery aside and eat everything with a fork (except soup). It was also the Americans who insisted on their morning orange juice, plus a big glass of cold water with every meal. Such a contrast from my only-too-recent experiences in the Lowlands during the War is almost unthinkable. I didn’t see an orange or any exotic fruit for 5 years. Coming up next: my encounters with movie stars. Signing off, Henri