One of the last ships of the Alaska season was here the other day. Soon all will be quiet, at least until April when it starts all over again. While sitting on a bench at the sea walk watching the world go by on a grey Autumn day, I heard someone singing. There was a fellow seated at the next bench over. Some passengers from the ship, along with some curious locals and dog-walkers, gathered around him.
I walked over. He was greying at the temples, playing a guitar and singing Mexican songs. All alone, no ‘hat’ to collect coins. When one of the onlookers tossed him a coin, he suddenly stopped, put down the guitar, as if his dignity was offended, and quietly lit up a cigarette.
Slowly the curious crowd dispersed, leaving just the two of us. “Usted de Mexico?” I asked. “Si, amigo”, he replied, pleased to speak his language. “I work in the galley”, pointing to the docked cruise ship. I told him I’d been on lots of sea voyages and also lived in Mexico. When he told me he was born in the Yucatan (Merida), I mentioned I’d been to Chichen Itza & Uxmal, back in 1969, to visit and study the great Mayan temples.
He put the guitar on his lap to make room for me to join him on the bench. “I am half-Mayan”, he said. “Have you heard of the Mayan Calendar?” was his unexpected question. “Yes, I have”. He then asked, “Did you know my wise ancestors predicted in their calendar that, at the end of the year 2012, a catastrophic disaster will take place to our planet?”
I replied, “I hope not, but the way we’re treating our Earth and our biosphere, we’re certainly heading in that direction”. The fellow added, “That’s why I work on ships, to see the world while it’s still possible. I sing and play guitar (‘mucho problemas’ with security and the guitar), not for the public, but for me. It makes me ‘feliz’, happy”.
I invited him over for a coffee at our place located just across the road. ‘Muchas gracias, amigo, but I must get back to the ship. I only have a short time for my break, and need to go back, for more problems with my guitar and securidad. Adios!”, he smiled. In turn I wished him “Adios”.
He then slung the guitar over his shoulder. Although there was a lead-grey sky, I could hear him whistling the jaunty tune, “Cielito Lindo”. No sooner had he gone out of sight when I remembered a question I’d meant to ask about the venerable Mayan ‘liquer’ which bears our name: Bentum. 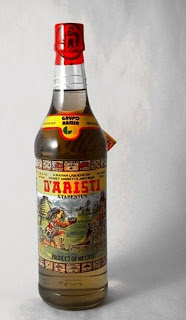 Ah, well, maybe next time?
Two autumns, one for he who departs, one for me who stays.