In Bihar, with Oxfam

We continue with our impromptu stop in Bihar, the poorest region of India. It’s 1967. Earlier the Oxfam team (from Belgium, Sweden, Denmark and the US), spared us a 4 hr. walk on a hot, dusty road “to nowhere” (after we’d headed out from the train station in the wrong direction).

With our new companions we played Scrabble, bridge and checkers in the evenings, and slept under mosquito nets (although there were no mosquitoes because of the drought).
Early next morning we joined the team to witness firsthand their work and see the local people.
We picked up the local workers (mostly farmers) and headed to where a well was being constructed. The Oxfam philosophy is “help people to help themselves”. So, Oxfam doesn’t give away water, they show people how to build and maintain their own water supply to irrigate their land, in this case, by building a Well. 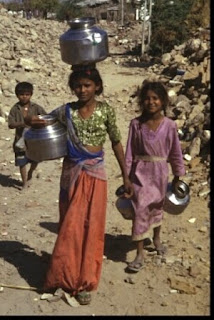 In 1967 most of the country people in this region were illiterate. They lived in huts made of straw, clay and cowdung. (Cowdung was also used for cooking fuel). Rows of brick-like blocks layed on the ground. “We’re digging a deep well, and these bricks will line the walls”, explained the foreman, “You see in the distance a field of green? That’s where we built the first well; the locals make the bricks, and we provide the equipment and expertise to build it”.
He told us the locals were very friendly, but lived under austere conditions. They usually earn only a few rupees per month, and twice a year, a travelling doctor or nurse visits. If a local person wants to send a letter to a far-off family member, they get charged by a local ‘scribe’. “It’s not always a two-way street here”, said the Belgian group leader. After a couple of hours, we had a break. Then another 2 hours work, followed by a light ‘lunch’. We noticed some were reluctant to return to work after the meal. “Once you give them food, they stop working; this attitude will change, but for now that’s just the way things are”, explained one volunteer.
My partner and I were travelling ‘light’, but we had some extra clothes. We ended up giving everything away except the clothes on our back. After a week it was time to move on. Our friends drove us to the station. We hopped a train (after a 5 hour wait) to Bombay. Altogether our unexpected ‘hop off the train’ in Bihar was an educational and eye-opening experience.
We weren’t aboard the hot and crowded train for long, however. Guess what? Once again I decided to get off. The reason? We’d heard from a fellow in our compartment there was a Maharaja’s palace nearby, and suggested we pay a visit. “Elephants and all”, he said. As soon as I heard the word, “elephant”, my mind was made up! Bombay could wait. This time we learned our lesson, no more walking off into ‘nowhere”. We hailed a shiny taxi and were dropped a ten-minute walk from the Palace. The driver said “the road is too bumpy for my car.” Next instalment . . . the Palace!
Posted by van Bentum