An encounter on the Dallas Road Sea Walk, Victoria

We’re having a “First Nations” summer here in beautiful Victoria. Early last Thursday morning, eleventh of September, another Alaska-bound ship docked at Ogden Point, nearby our home. This was one of the smaller and luxurious vessels, not the huge ships which usually visit our port-of-call.

It was mid-morning; I was sitting at a bench right by the ocean, enjoying watching the world go by on this balmy September day. 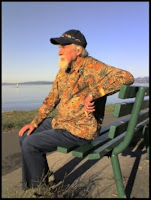 An older couple came by; she wore a “Star-spangled” blouse with bright, Sky Blue pants while he was dressed in white and wore a hat with “Stars and Stripes” head-band. Signalling they were friendly neighbours from the south. Or, as the Bushman (San) would say, “I saw them coming from afar.”
“You both look dapper and colourful, are you from the ship?” I asked. “Yes, we are, we’re heading to Alaska. Is it always so nice and sunny here in September?” They stopped strolling, but didn’t sit down.
“Sometimes it’s sunny like this, but not often. This year we’re experiencing a “First Nations Summer”, was my reply. “What’s that?” asked the woman. “Well, most people say “Indian Summer”, but I call it “First Nations Summer”. I continued, “Indians are people from India. Columbus made a mistake.” The woman asked if I lived here. “Yes, I live right there in that building”, pointing to our apartment just 25 metres away.
With their attire, I asked if they were celebrating their anniversary or some other special occasion. His eyebrows shot up, and he said, “Don’t you know it was 7 years ago that September 11 happened?.”
“Sorry”, I replied, “I completely forgot”.Silence.
“We’re very proud of being American!”, he exclaimed, “we’re not from New York, we’re from Florida, but we feel it, you know, said the gentleman.The lady did not seem amused. They walked slowly away, mumbling “Can you imagine? He didn’t even remember . . . etc.” I couldn’t catch the rest since their voices faded away. . .
I would have liked to tell them about the sea otters that come by and frolic in the kelp beds, about the eagles, Great Blue Herons, about James Bay village (where we live), and how the very spot where they stood was originally was the home of the “Swengwhung” nation.
But that’s how it goes. Some ships anchor, while others just pass by in the night.
Anyway, I trust our Floridians are having a memorable journey and cruise to Alaska. At least the weather is cooperating.
Posted by van Bentum