To do field painting in a natural environment sharpens the “noticing” and observing senses.Each change of shadow, light, movement, wind, clouds, temperature, plus the myriad variations of the colour Green alone, how and where you put your feet - - - all this and more serve to ‘sharpen the pencil’.
Painting outdoors in the Rocky Mountains is different from visiting as a tourist or hiker. For an artist, it’s not the same, no matter where. The act of painting (or anything done with absorption) can lead to a timeless state of mind. Speaking of things “not being the same”, landscape painting has never been the same since the Impressionists took their art out of the conventional, academic studio environment, and placed it outdoors to capture on paper or canvas. Here in Canada we had the Group of Seven, who came later and were “our Impressionists”.
You have to respect the courage, the challenges that were faced by these painters working in the field. In France --- the Mistral and the fierce summer heat; in Canada, mosquitoes and black flies. Yet, they kept going.[Today the public loves the Impressionists and great artists such as Vincent van Gogh, and here in Canada, the Group of Seven. But that’s easy; after the initial scoffing and mockery, a century has gone by bestowing and recording praise upon praise on these pioneer artists, now household names. ]
Since arriving in Banff early May, I’d done several oil and oil pastels in remote locations throughout the Park. Some days while hitchhiking early in the morning I’d get a ride into Canmore where I did “The Three Sisters” in oil pastel.
Several times I gave paintings to strangers who offered me a lift back into Banff. In those days, I was grateful for the being there, I believed I could always do more some other time. Little did I know what was in the lap of the future, or I would have kept every one. Now I’ve completely lost track of where these paintings are, no record for our archives.
The grandson of Mrs. Parkin, my landlady, lived in Calgary. He visited sometimes, and one day his grandmother said, “Why don’t you take Henri to Calgary, for the Stampede?” And so he did, and I stayed for the full Stampede week. 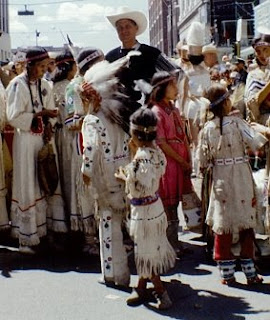 What an experience! I have never forgotten this extraordinary spectacle. (Remember at this point I’d been in Canada less than two years, coming from the Lowlands, where as boys we grew up under the spell of Cowboy and Indian movies.)
Back in the Rockies, one morning I’d already spent several hours painting at Moraine Lake when a big van pulled up with several students and two faculty members which later I learned were from the Banff summer school.Earlier, my landlady mentioned “that School” up on Tunnel Mountain, but I’d not been there to visit. (From what I’d heard, I couldn’t afford the fees.) Here's a picture of me painting at Moraine Lake: 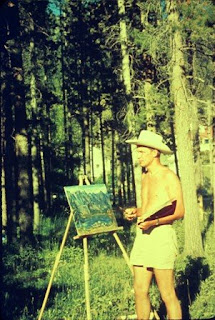 The students, all women, set up their easels. One of the faculty came over to me and introduced himself: Manly MacDonald. He looked at the work on my easel, then asked a few questions, including who was I, where did I come from, where was I staying, and how long had I been painting? He also enquired if I’d ever visited the “School”. Mr. MacDonald then said, “I think you should come and visit the School sometime.”
I finished my painting and waited until the group was ready to return, hoping to get a lift. This worked out well.A few days later, I walked up Tunnel Mountain to pay the School a visit.
That July day, 1959, at Moraine Lake, destiny guided me towards an unexpected and unknown road into the future. A path I am still walking. More on this, later. Happy Trails! Henri
Posted by van Bentum