After seeing the woman sketching here at the seashore, not one but several doors opened into my ‘memory mansion’. Here we are already on part 3, yet, the most important part of the Banff story (other than the memorable experience of simply being there) hasn’t begun. Of course this isn’t a play-by-play colour commentary on the full summer of 1959 in the Rocky Mountains. 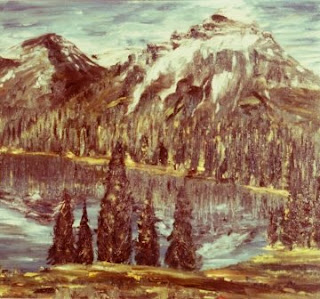 Actually my motivation for recording all this is the fact that though I did numerous landscape
paintings ‘en plein air’ at Banff National Park, it was there that I ‘crossed the Great Divide’. The wheel was set in motion for a major evolution in my work.
But let’s not be too hasty, first things first. On my early morning painting treks into the mountains, I’d see chipmunks and also lots of Gophers everywhere. Gophers would swiftly pop up and down into their holes. They whistled shrill warnings to their family while I set up shop in their neighbourhood.
Since I was always alone in the wilderness, one of the fishermen who gave me a lift to the road leading up to Peyto Lake warned me to be careful not only of the Grizzly and Black Bears, but also the Wolverine. This was good to know. Coming from Holland less than 2 years earlier, I’d never heard of Wolverines.
Anyway one morning I was seated, totally absorbed in trying to capture the intriguing shape and milky turquoise-colour of Peyto Lake. I was looking down on the Lake below, when suddenly I heard a rustling and crackling sound. “Oh-oh! A bear or wolverine!” I thought to myself. Slowly I turned my head around. A few feet away, there was a chipmunk nibbling, very dapper, on one of my sticks of oil pastel! He was holding it gently in his front paws, having already carefully removed the wrapper. A breakfast snack. 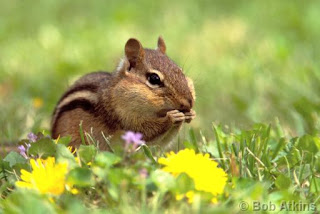 I’d come back to Banff soon after high Noon, if I could get a lift. The temperature rose high and fast in these early days of summer. Back in those days, 1959, “Indian Days” were held every summer, just outside the town of Banff. First Nations chiefs of the Blackfoot, Stoney, Blood, and other nations sat outside their large ‘wigwams’. They’d answer questions posed by curious visitors.
One of the Chiefs said something I’ve never forgotten. He said to our little group, “White man is funny, because when we say ‘There are only twenty ocelots left’, some of you would say, ‘Oh, let’s go shoot them, before they’re all gone.’”
Tomorrow, I’ll share with you amongst other events, how I was ‘discovered’, at Moraine Lake!
Posted by van Bentum