Shipwreck with a "Lucky Strike", Part One

“With all your ocean-going travels, have you ever had a personal mishap at sea?”, someone from California has asked. Well, as a matter of fact, I’ve experienced two dramatic shipwrecks.The first took place in 1962 after I quit my job as a proof reader and layout person at Rous and Mann Creative Printers in Toronto. I decided to devote as much of my life as possible to painting. It was November 1961, winter on its way.
I took the last cargo ship (Norwegian freighter) of the season from Montreal to Rotterdam. (On our Atlantic crossing, Force 9 storm.) Made a short visit to family in Holland, then by train to Paris, on to Barcelona. I’d planned on touring Spain for the winter to paint. After journeying around the country, I arrived back in Barcelona.
There at a small waterfront hotel someone mentioned the island of Ibiza. Paradise. Always sunshine. Very reasonable to live. That’s all I wanted to hear! 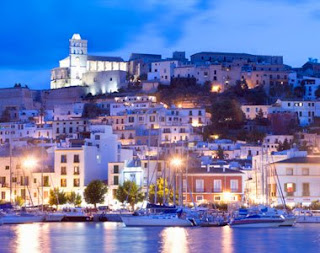 In no time I was on the ferry taking me to this “Isla Blanca”. Remember this was 1961, long before Ibiza became the trendy destination it is now, with international airport. I rented a villa in the hills which overlooked the sea; eight rooms, all by myself, very inexpensive, about a 45-minute walk from town. It came with a “Burro” (donkey), which I had to look after. Back then, there were only three other houses on that hill. It truly was paradise.
Months passed, my work went well. I fitted in well with the people, the culture, the atmosphere. Then one morning, I noticed in the local bar an advertisement looking for crew to sail a 20m (60 ft.) Sloop to Greece. Wow! What an opportunity.
I applied to be a crew member and was hired. The one-mast Sloop, “Buena Esperanza”, with fore and aft rig, had previously been a fishing boat. A Spanish name, but built and registered in Holland. She was freshly-painted and readied for the journey to Greece to be converted to a race yacht.
We were an international crew: Captain = Argentina. First Mate = Denmark. Cook = Indonesia (the only woman). The hired deckhands, all based in Toronto were: Canadian, Japanese-Canadian, and Netherlander (yours truly).
Early one April dawn, I rolled up my canvasses in a thick sheet of plastic, tossed my bag into my bunk, and said ‘Adios” to Ibiza. 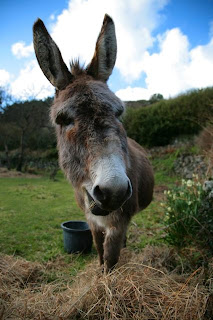 Leaving my Burro, new friends, and blossoming lemon, orange and almond trees behind, we sailed off into a new adventure. Little did we know. . .
Posted by van Bentum