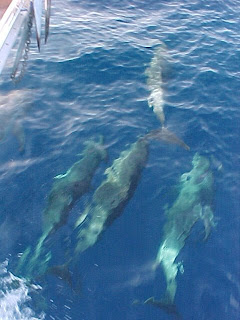 At the bow more dolphins displayed acrobatic skills and frolicked. The seas changed from cobalt to ultramarine. At night we were treated to phosphorescent displays, like underwater fireflies. One morning after a particularly difficult watch (a 4 hour battle against strong currents), I went below for a rest, something I rarely do.


Suddenly, hours later, a loud voice woke me. “Henri! Get up! We’re in deep trouble!” I opened my eyes to see a mate in dripping bright yellow Sou’wester.

I went above deck and was hit by a strong, hot wind. Skies were dark and a boiling, foaming sea was in view. The Sloop pitched and rolled. “Sirocco!” screamed the first mate.


All hands on deck were dumping pails of seawater which came splashing over the deck. Fore rig was gone, the mainsail torn. We could just barely make out the jagged and rocky coast of what must be Sicily.


This happened to be a Sunday. Sicilian fishermen do not go out to fish on Sundays. Our Captain somehow managed to spot a village, and the villagers had spotted us. We hoped and prayed they’d break the tradition of “Never on Sunday” and come out to rescue us.

Soon a fishing boat did appear and approached our sloop. They shouted to us, “Stupido! Ollandas! Sirocco!” (They’d seen our Netherlands flag which somehow remained intact.)

The skies by now had turned azure again, wind and seas calmed down. Then they shouted out, “Americano cigarettes? Scottish Whiskey?”


“Si, si”, hollered back our Captain. In fact we had cartons of Camel, Pall Mall, and Lucky Strike. Also six bottles of good old Scotch. That did it! Their fiery dark eyes lit up. Those were the magic words that led to an immediate and swift rescue.


We were towed to the breakwater. Mass was over, bells tolled, and everyone from the village came out to stare. I remember seeing masses of geraniums. But women all in black; men in dark suits, white shirts and black ties. Only the children had some colour in their attire. Our saviours carried their trophies (American cigarettes, and Scotch) home.

Later that same day, we were guests at an outdoor dinner. There must have been 40 people seated around a huge table, including our crew and our rescuers. A memorable dinner it was, under the starry Sicilian sky.


Was it a premonition that had made me roll up my canvasses in a thick plastic sheet? Whatever, but no seawater got through.

“Bueno Esperanza” (Good Hope) would take some time to be repaired, so I opted to move on and make my way to Rome, then back to Canada via Amsterdam, Rotterdam and New York.
Along the way, I had time to digest our adventure at sea . And our rescue? Now that was a “Lucky Strike”.