How My Painting Career Began (a different kind of Santa) 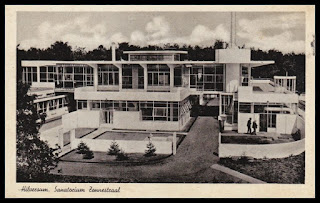 Zonnestraal Sanatorium many years ago

We all have some anecdotes and memories of the Christmas season.  Long ago, in 1952, I had tuberculosis on both lungs, and was bedridden for several years at Zonnestraal (“sunbeam”) sanatorium in the Netherlands.

Each patient had his own room.  The rooms were a unique design: no windows, but one side of the room was completely open to the outdoors. The Sanatorium was located in a small pine and oak forest, so this allowed for a lot of fresh air.

Having much time on our hands, and being young (then I was 22, now 89), we were encouraged to do something, like handicrafts.

Believe it or not, some made photo albums from old X-rays of patients who had died. Others, like me, worked with raffia, creating all sorts of animals.

Many of the patients worried about their illness, which of course is counter-effective to healing.

Then I had the idea to do some sketching.  It wasn’t long before several fellow patients began to draw too.

The town had a local, elderly artist, Jan Zondag (“Jan Sunday”).    When he heard some patients at the Sanatorium were doing artwork, he came to visit.

He encouraged us, gave pointers, and all this morphed into us wishing to do art in colour.  Now, it’s called “art therapy”.  But then, it was “you need to do something to prevent worrying and feeling sorry for yourself.”

My father brought me chalk pastels, but these were soon rejected by the nurses.  It made a mess on the sheets. There was no oil pastel, it hadn’t been invented yet at that time.

Jan Zondag said we could work in coloured pencil, gouche, watercolour or even oil paint.  Since one side of our rooms were completely open, the turpentine and oil paint odours did not linger about.

There was one problem – art supplies were costly.  They still are.

By now, it was late November, close to the day of Sint Niklaas, the holy man from Myra, Greece (now Demre, Turkey), after whom Santa was modelled, and a day much celebrated in the Netherlands, especially for children.

Without us knowing, Jan Zondag began collecting funds for art supplies from doctors and friends.

And on Saint Niklaas Day morning, December 6, to our joy, six of us received art supplies that would last for quite a while.

Although working himself, Jan Zondag – the Good Samaritan - visited us twice a week, to see how we were doing.

Myself, I had unknowingly embarked on a career that has lasted more than 65 years.  When I was released from the sanatorium, the doctor told my father this creative work had speeded up healing and shortened my stay by years.

All started because of the mentorship and care of that kind “Artist Santa”. 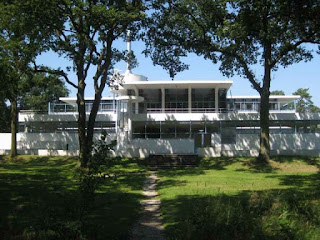 p.s. In an earlier post, I wrote about how the Zonnestraal building has become a UNESCO World Heritage site.  “Founded by the Diamond Workers Union of Amsterdam, the sanatorium was part of a larger aftercare colony for tubercular patients. It was funded by Union dues as a facility that would train members who had been afflicted with the disease for their return to society. Zonnestraal is emblematic of the emerging ideals of social democracy in the Netherlands during the 1920s, and it reflected the new concept of using occupational therapy in health cure.”   World Monuments Fund