Antarctica comes from the Greek, “Ant” (opposite) and Arktos (Bear), referring to the Polar star of the Ursa Minor constellation. Antarctica = “No/or Little Bear”. The ancient Greeks didn’t know it, but there are no polar or any kind of bears in the Antarctic, so the name is all the more fitting.
Like we mentioned in the previous post, entering the portal of Neptune’s Bellows into the caldera of Deception Island required superb navigational skill. Plus, good luck and cooperation of the elements. Our Greek captain, who’d never sailed in Antarctic waters, performed an amazing feat that December 30, 1999, one day before Millennium Eve. The whole experience of entering the caldera remains imprinted in my memory chambers.
In preparation for the Zodiac landings ashore, all the passengers attended mandatory orientations where they learned all the “do’s and don’ts” while ashore. For instance, we were advised in a friendly but firm fashion by our onboard naturalist to keep a minimum distance of 5 metres (15 ft) from the penguins, of which we would be encountering myriads. Most of the ones there are Chinstraps. We were not allowed to approach the rookeries, but we’d witness many penguins as they went to and fro the icy waters in search of food.
The Zodiac crew were skilful and diligent. Many had been specially recruited. Amongst them, they had years of experience working in the Southern Ocean. December being high summer in the Antarctic, the sun just ‘goes’ for a few moments, giving lots of daylight for the dozens and dozens of Zodiac trips.
Shore Landings: because we were such a large number of people, a special system was devised, executed with nautical discipline. You had to be all suited-up and ready to go when your number was called. The Young Presidents Organization (YPO) passengers sported the latest fashion in cold-weather gear. Not to speak of state-of-the-art camera equipment.
“Only your footprints should be left behind”, we were warned by our naturalist guide. “And remember to keep your distance from the penguins!” We were told not to come too close, but nobody seemed to have told the penguins to keep their distance from humans! 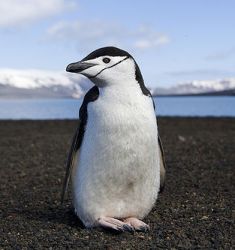 Eagerly we stepped foot on the icy-shore. It was bitterly cold. Again, the guide said, “Don’t get too close, remember, 5 metres”. It’s all very well, but nobody seems to have told the penguins!
Penguins are very curious, but also protective of their young. Some immediately waddled over to us, as if we were family and wanting to say ‘Hi’ (and ‘stay away from my chicks’). The chicks had already lost most of their down. It’s some sight (and smell), to be in such close contact.
Penguins may waddle ashore, but once in the icy waters they “fly”. Those who return with food for the young are shiny and clean, while the ones heading out to sea are dirty, and smelly. So you have two “rows”, one going and one coming, crowded like a boulevard in a big city.
Skuas overhead are the penguins’ menace. They dive-bomb to snatch the chicks, and can also dive-bomb us humans: this I can personally vouch for! Our YPO passengers, who just a few days' ago left their sophisticated lifestyles back home, were now like children, full of awe and wonder while wandering amongst the penguins. When we returned to the Zodiac, a young girl pointed in the distance and shouted “Look, Daddy, a whale!” Our guide replied, “No, that’s the vents from the Hot Springs. Remember we’re inside a volcano.” Fire and ice! Coming soon, final episode of this Antarctic adventure. Signing off, Henri