Isaac Newton stated “I can calculate the motions of heavenly bodies, but not the madness of people...”

This economic upheaval and mass exposure of greed on the highest level is not the first time of course financial speculation brought ruin. There was the Great Depression following the crash of 1929 (the year yours truly arrived on this spaceship ‘Earth’ for a spell), plus other major financial upheavals in the past.
Economic crisis, people losing their homes, financial security lost overnight like a house of cards, a collapse. 2008? No, I’m talking about the 1634 in the Lowlands, and all because of: a tulip. 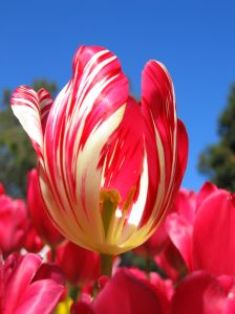 Yes, they call it now “Tulip Mania”, when enormous financial speculation and frenzy took place in Holland. Mostly centred in Amsterdam, indeed it all began with an innocent tulip bulb.
Yes, not only had this bulb grown into a beautiful, sturdy, straight tulip, but its colours were outstanding in the backdrop of the drab browns and greys of the Netherlands.
The tulip, now so popular and common worldwide, originates not in Holland but in the mountains of what was Persia and Mesopotamia - - - Iran, Turkey, and Iraq. People are often surprised to discover the tulip didn’t originate in Holland.
Furthermore, it got its name from the word for turban, “Tulband”, because of its resemblance to the headgear worn by the Ottoman Turks. Later the word became “tulip”.
Although Holland was, and is, a small nation, this didn’t stop it from ‘spreading its wings’ worldwide. From early on, the Hollanders were active traders and very successful at business. First they bought Manhattan (which the settlers called “Nieuw Amsterdam) from the native people, and then sold it for “an apple and an egg”. (The ship I sailed on and topic of the previous 5 posts was named after Nieuw Amsterdam, in memory of those days.)
Witness the Netherlands’ sea-faring explorations and colonization on a large scale (of which nowadays, of course, only a few remain such as Netherlands Antilles, Aruba, Bonaire, Curacao (the “ABC” islands we call them in Holland); St. Maarten, and of course, Indonesia and the island of Irian Jaya (the other half of which is Papua New Guinea). Now independent. It was all because of the spices and other resources.
Anyways, because Netherlanders were such diligent traders, they found themselves in the Middle East and the western terminus of the Silk Road. They bought and traded all kinds of new goods, and one of these was the tulip which they brought back to Holland.
Upon seeing its beauty, colour and unique long-lasting nature in the stark landscape of rainy Holland, a bidding war soon began back in Amsterdam: “Tulip Mania”. Yes, at one time a tulip bulb was worth more than a house! 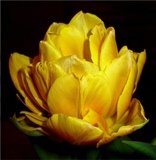 Now, I’m asking you. And of course it all came crashing down when later, people came to their senses. See what we mean with financial upheaval being nothing new?
The Flemish master Jan Brueghel The Younger immortalized that époque in his famous painting, “Allegory Upon the Tulip Mania”, depicting humans as monkeys.