There was a Swiss piano teacher that Summer in the Music Department at the Banff summer school, 1959. He loved hiking up to the higher elevations, above the timberline.
Often I joined his group, into that realm where Pika, Mountain Goat, and Bighorn Sheep roam. (This time I went along for the hiking, not field painting.) The change in my work also raised eyebrows of my landlady, Mrs. Parkin and her friends.
Later when I got back to Toronto, Dr. Goodman (who became the recipient of all my Banff landscape work) found the latest changes difficult to understand. The faculty must have noticed something within that I was not aware of. How about me? Well, I discovered a freedom with unlimited horizon. To be no longer enslaved to the conventional “real” in Art opened many doors, the most important being “Imagination”.
I always had a vivid imagination, but it was the faculty there who awoken it again. (However before attending the School, I’d already begun to break away from monotony of greys, greens and browns of mountain scenery. I included warmer colours. 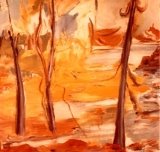 “Echoes of Native Art”, done later at the School and won all those awards I mentioned earlier, ventured already into ‘surrealism’.  No more crawling like a caterpillar. Instead, soaring as a “flutterby”. Once imagination is tapped, inspiration follows. Charlie Chan says, “Human mind like parachute. Works best when open”.
When Ali Baba approached the cave, commanding “Open Sesame!” , the grotto opened, revealing a bounty of treasure. In another story, the Genie in the bottle granted three wishes, after which he was liberated from the bottle, exclaiming, “I am free! I am free!” In my case, Aladdin’s lamp was rubbed, and imagination leapt out.
To experience, to explore, to discover: this is what creates real adventure. Who would have thought the pleasure and joy of all those happy adventurous moments doing field painting, ‘en plein air’ in the Canadian Rockies, would be the last time I’d paint landscapes?
Another type of joy would replace it, such as that of Schiller’s “Ode to Joy”, set to music by the immortal Ludwig van Beethoven. My outlook had changed, and now I was looking in, having “crossed the Great Divide”, in Banff National Park – of all places -- from “Landscape to Mindscape”.
Posted by van Bentum