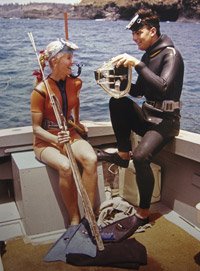 We met Ron and Valerie Taylor on the first-ever dive abd snorkel expedition to the Galapagos Islands. We were honoured to be with such experienced divers. This was in 1989, and already these Australians had established a worldwide reputation as divers, deep-sea photographers. Their expertise has been called upon for such films as Jaws, and Orca.

You may know Valerie from the cover of National Geographic magazine, where she wore the suit made of chain-mail which Ron invented. “The Taylors are credited with being pioneers in several areas - the first people to film a great white shark without the protection of a cage and the first to film sharks by night. They are also credited with correcting the belief that sharks need to move forward to survive by obtaining footage of sharks sleeping on the sea-bed.” (Wikipedia). Other than the Jacques Cousteau expeditions, they were the first to observe sharks close-up from a submerged cage. 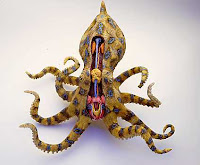 We learned a great deal from Ron and Valerie, including to beware of the lethal Blue-Ringed Octopus, the Stone Fish and Sea Snakes in Indonesia. Both warned us never to float (or wiggle arms and legs) on one of those air mattresses (or surfboard), because this attracts the shark. Although, Valerie told me, these prehistoric creatures don’t really like the taste of humans.
Posted by van Bentum