No sooner did we reply to yesterday’s question from New Brunswick about nurturing athletic talent (“Ability, Energy, Opportunity”) in which we drew parallels with artists, than today’s newspaper says a fundraising campaign is underway for an Emily Carr statue. (We just wrote about Emily, see July 12 post.)

Organizers need $450,000 to pay for it. Well, well, well. Here is yet another icon who was mostly mocked and neglected while she was alive. Luckily Emily had some limited means, so there was some form of ‘Opportunity’, apart from her vision and determination. She was not only a great painter, but a fine writer who expressed her heart and soul.
When alive and breathing down our necks, the Carr’s, the van Gogh’s and so many others were ignored, mocked and called (at the mildest) “eccentric”. Still happening today.
“The horses that deserve the oats don’t always get them.” This decades-overdue monument (if and when finished) will be placed at the corner of Belleville and Government Streets, adjacent to the Fairmont Empress Hotel here in her home place of Victoria. (In fact Emily lived just a few blocks from our abode in James Bay village.)
According to the newspaper, the statue will be 1.25 times life size, and she will be seated on a rock with a sketchpad on her lap. She will have her monkey "Woo" on her shoulder and her dog "Billie" at her side.
Now it definitely will no longer be “Emily who?” once the statue is placed there proudly. Do people ever question how come the Art Gallery of Greater Victoria (AGGV) has so few works by Emily Carr? Yet she lived here most of her life. The fact is Vancouver Art Gallery across on the mainland of B.C. has many. But, in the late 1950’s the drawings, gouaches, watercolours and paintings were stored in the basement. The reason? They told me, “no space”. 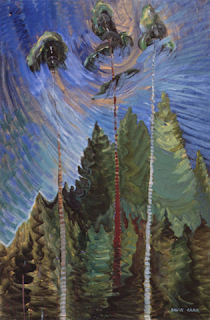 I for one, if still breathing, definitely shall go to see the statue, but not the day of the unveiling with all the dignitaries. No, I’ll be there quietly, early one morning, and will say “Bravo, bravo, well done, Emily. Forgive them for being so unfortunately ignorant, full of mistrust, and of little faith while you were with us.” The statue will be ready June 2009. But, as the other saying goes, “Better late than . . . .”
Posted by van Bentum